The recent attempt to cover the needs of Greek banks in fresh capital via a mix of a private and public infusion of funds amounts to nothing else than a fire sale. The recent rights issues of Greek banks were fully covered because Greek bank shares were sold for a few pennies with offer prices ranging from 0.02 to 0.04 cent per share. At the same time, the Greek taxpayers’ stake in Greek banks, held via the so-called financial stability fund, is sharply diluted, e.g. in Alpha Bank the state’s stake is reduced to 11% from 66,4% today, in the Eurobank from 35% to 2,4%, in Piraeus Bank, which sold its new shares for 0.03 cent per share, from 67% today to 22%, although the bank will still receive 2.6bn Euros state aid, 2bn in the form of CoCos purchased exclusively by the Greek state, and 0.6bn in shares. Then, for the greatest Greek bank, the National Bank of Greece that didn’t manage to cover even 1/3 of the total amount sought while its shares were offered at 0.03 pence per share, the reduction of the Greek state’s stake will be 24% to 33% from 57% today. This while the state will still inject 2.75bn Euros in fresh funds, 2.06bn of this in CoCos and the rest in shares. At the same time, the state waives its rights on 1.45bn Euros preference shares, which will now be converted to common shares. In addition, the National Bank will have to sell its most valuable asset, its Turkish subsidiary at 2bn Euros while its acquisition in 2006 cost the Greek bank 5bn EUR.

Who is to Blame for Austerity and its Consequences in Greece? 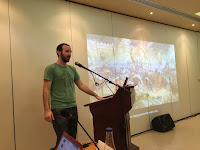 By the end of the crisis, Greece will have lost about 27-30% of its economic output. This sort of disaster is usually seen only after wars and biblical events –but who is to blame in this case since God and the generals had presumably nothing to do with it? A popular cause is “austerity forced upon Greece by international institutions”. This is doubly flawed.